Good morning! I’m still smiling from all the love you have sent me over the last week since we announced. 🙂 Thank you all!

Our two week wait actually went pretty quickly this time around…though I felt ZERO symptoms. With my miscarriage from our IUI, I felt a lot going on during that wait so I kept comparing everything. Our transfer was on a Sunday, so I took that Mon-Weds off to relax and just take it easy. Monday Dave had off as well so we went to the movies to see American Snipper and out for burgers. It was nice to get out and to not focus completely on what was potentially happening in my body. I took it easy the rest of the week and was actually happy to get back to work that Thursday to keep my mind busy on something else.

That Saturday night we went out to dinner with Dave’s football ref crew and I decided during that dinner I was going to take an at home test on Sunday. (Our blood test was set for Tuesday…so technically not a full 2 week wait). I didn’t drink at the dinner (of course) and I just kept thinking that it didn’t work. I tried really hard to stay positive but my mind was going…oh no, we used two embryos, if it didn’t work we only have three left, we cannot afford anything else after this. etc etc etc.

Sunday morning at around 5am, I couldn’t take it anymore lol…I got up and found my hidden pregnancy tests and prayed. I was shocked as I looked down, not even a minute after peeing on it that two lines were coming up. I thought I was seeing things (as it was 5am) and I put it up to the light and started crying. I couldn’t believe it!!!! I ran in and woke Dave up, poor guy- I have done this to him before, and told me the amazing news. We actually lied and told our families the wait was a full two weeks, so we could find out the news and keep it to ourselves for a few days before sharing. Plus- we got to surprise them, something you really cannot do much of when doing IVF.

A big storm was heading in for Tuesday, so I took it upon myself and went in for bloodwork a day early. Our at home test was a very strong two lines, especially for being so early on but I was still shocked at just 8 days from the transfer, our HCG levels were over 250.  When we heard this amazing news, we told our parents. I wanted to capture it so we decided to facetime in the middle of the day and completely shock them. I first showed them Bradley laying there with a Big Brother sign, they kept staring so confused and later I was told I should have written “I’m a big brother”…lol. Here are three pictures, I won’t share the rest as they would probably kill me, haha but they were crying and SO HAPPY! (I apparently found it hysterical). 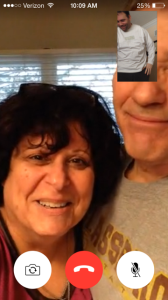 Of course, I was still a nervous wreck and wouldn’t be able to breathe until our heartbeat ultrasound, at around 7 weeks. Our blood work kept doubling like it should and at 5.5 weeks we had our first ultrasound which really doesn’t show much, since it is so early, but they look for a sac and a fetal pole. A part of me thought since the numbers were so amazing that it could possibly be twins, but I was actually a little relieved when we saw just one in there.

I was feeling really good at this point, still no major symptoms, which scared me because of course you want to feel something, so you know it is still in there!  Boy did I jinx myself.